Keep your gentle nature visible. Others will see God in your actions and words. Let me tell you of my gentle father full of compassion.

A young boy with an aching stomach doubles up in bed crying sad tears. He threw up but his brother did not, and now he is dead. “It is all my fault,” he thinks as his tears stream down his cheeks. The worried face of his father fills the doorway and the little boy shrinks back into his blanket.

“Frank.” He strides into the room and places his hand on little Frank’s head. “I’ve lost your mother and now your brother. Don’t leave me too.” While his father’s head is bowed, he sees Mamie, his stepmother, standing in the doorway with his baby sister. Their faces show their worry and concern, but Mamie’s face also shows hurt from his daddy’s words.

“Rufus, the minister is here.” Mamie steps back and pulls her little girl close.

Rufus lifts his head, and Frank shrinks from the hard look on his face. “Stay strong, Frank.”

The disappointments and sorrows of Edgar Frank’s life would fill his heart and mind for many years.

Frank stayed strong and lived to be 92. His gentleness and kindness mark his life. From buying missionary kids the coats they need to keep warm to emptying the trash at church, no job was too small. He worked hard to provide for his family as he experienced losses of his own.

Frank lost his son, Donny, who was stillborn. He buried him while his wife was still in the hospital with Donny’s twin, Danny. After all his children were grown and married, he lost his father and step-mother. Within months, he lost his older brother. Then he helped care for his wife’s mother until her death.

Frank knew how precious we are and how much we depend on God. He cared for each soul, young or old, watching for any opportunity to spread God’s love. A touch here or a smile there, he labored for many years serving God.

James 3:13 Who in your community is understanding and wise? Let his example, which is marked by wisdom and gentleness, blaze a trail for others.

Philippians 4:5 Keep your gentle nature so that all people will know what it looks like to walk in His footsteps. The Lord is ever present with us. 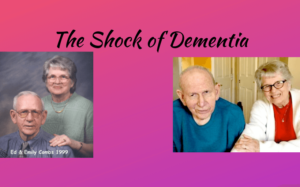