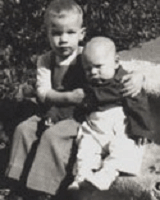 Once, a long time ago, on a special Thanksgiving Day, a boy was born. He was filled with compassion and love. His first feeling was one of loss. His twin had died and no longer near him. He missed his brother. His mother was sleepy and his father was sad. He felt sad for them and sad for himself. But he would be okay. He was the oldest.

Not long after he was born, his mother was gone. Then he was given to his grandma for a time. She had another baby but this one didn’t come home. The newest baby was with his brother. He missed his mother and his father but he would be okay. He was the oldest.

Some time later he returned to his mother and his father. He played and enjoyed himself but he still missed his twin. Soon his mother and his father began talking about a new baby. He was interested. He might have a brother to play with again. He would be good to the new baby. The new baby would not be lonely. And he would be okay. He was the oldest.

Soon the new baby was born and he had a new brother. The baby didn’t do much so he watched over him and gave him toys to play with. He talked to the new baby and told him all the things they would do together. It would be okay. He was the oldest.

In the next year the new baby was sick more and more. He wasn’t sure if the new baby would ever be able to play with him. And then the new baby was the old baby and a newer baby was born. This new baby had made his mother very tired and his father very worried about money. But he would watch over them both. They would all be okay. He was the oldest.

When his sister was born he knew things had changed. He really did care for his brothers and his sister but he needed a break. He now had to start all over teaching his sister. And he had more to do to take care of her. He wanted to play but they didn’t always want to play what he wanted to do. He also noticed that he could do things better than them. Things he enjoyed. He still had to take care of them. It was okay. He was the oldest.

He started school and learned to read. He didn’t understand the other children and why they didn’t want to do what he wanted to do. He wasn’t sure how to make friends. But he did know how to take care of people. So he watched out for the other children on the playground and helped the others in class. He talked to children but he was still lonely. It was hard to always be the responsible one. But it was okay. He was the oldest.

One year they discovered that he was very smart. He was glad to get the attention. But now he had to do very well in school. He needed to get all A’s. This way he could prove that was special. This was a big responsibility to add to all his other tasks. He let his younger brothers and sister take care of each other more. But he was still very lonely. Why didn’t it seem like people cared how he was? It had to be okay though. He was the oldest.

Graduating high school seemed like a never-ending task, but it finally happened. He had been through some turbulent years where it seemed his emotions were taxed to the breaking point. He had difficulty caring about others because he didn’t think he could care enough. He was just too tired to care any more. And there were too many people that needed his care. It was too much responsibility. But he tried to impart his knowledge of life to his brothers and his sister. They didn’t always appreciate it. And sometimes he thought he might be too angry to talk to them. He thought it was okay. It didn’t matter. He was the oldest.

But then he realized it wasn’t his place to take care of his brothers or his sister anymore. His children were grown and they were taking care of their own children now. He visited his parents and was shocked at how old they had become. And he realized that they loved him. He hadn’t known that before. He wasn’t sure he remembered what it was like to be the only boy. He didn’t remember being a young baby who they cherished and loved. He didn’t remember being very young with no responsibilities. But he saw now, by looking through the years that his mother and father loved him. They thought of him and worried over him. But it was going to be okay. He was the oldest.

In my family four children were born in quick succession. There were two lost babies, one my oldest brother’s twin. My parent’s struggled to feed, clothe and house all of us. In the middle of all of that my brother excelled at being the oldest. His compassion and love surrounded us, as we grew older. We didn’t appreciate his sacrifices or the loneliness that came from being the oldest. We copied everything he did that looked like fun. We stayed away from everything he did that didn’t turn out so well. He didn’t have the option of learning from some one else’s mistakes. He made them for us. Nothing he had in life growing up was “his”. There were times when he resented us. And hopefully, there were times he enjoyed us. 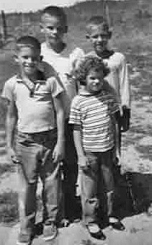 So, Happy Birthday, Dan, and thank you for being the oldest.

Cast your cares on the LORD and he will sustain you; he will never let the righteous fall. Psalm 55:22

Cast all your anxiety on him because he cares for you. I Peter 5:7